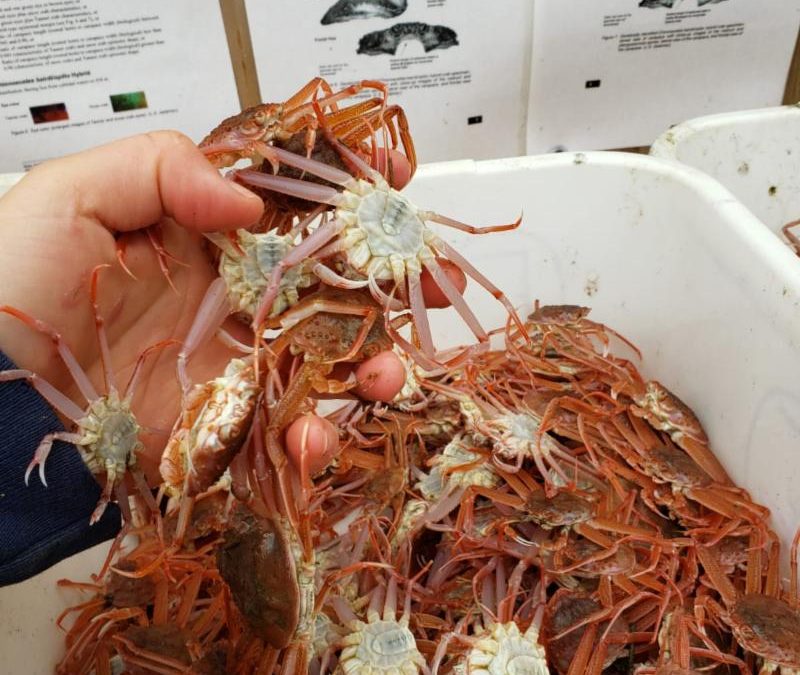 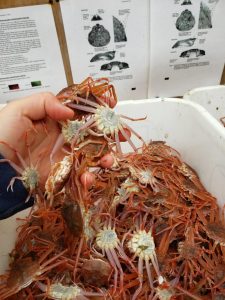 BSFRF has recently completed our primary summer survey activity. The approach for this year’s field work was to maximize the time on the water to accomplish as many research objectives as possible which included collections for a number of other collaborating projects. The main objectives included using the BSFRF Nephrops trawl to target juvenile Tanner crab areas and to then switch gears and use standard crab pots for the capture of red king crab for our first efforts with new tagging technology. Both main project objectives were achieved during sampling. The F/V Royal American was chartered for a 22-day period in June out of Dutch Harbor and served as an excellent research platform as it is a capable and active catcher vessel, with current gear and capacity for both trawling and crab pot fishing.

From June 8-25 BSFRF completed crab-specific trawl surveying in outer Bristol Bay for juvenile Bering Sea Tanner crab. A total of 115 trawl tows were completed over 29 NMFS survey blocks within the standard NMFS survey area. The BSFRF Nephrops trawl was used during these 115 tows for sampling juvenile Tanner crab at 4 randomly selected locations within each NMFS block. The blocks covered this year were identified during BSFRF’s prior years of sampling for juvenile Tanner crab (2016-2018). The results from this June’s work are expected to be added to prior years’ work to help further inform NMFS trawl efficiency, independent estimates of juvenile Tanner crab year classes, and potential estimates of natural mortality.

For the red king crab capture and tagging work the capture, tagging and release of the full planned sample was a success. The Royal American was in communication with both NMFS survey vessels (the F/V Vesteraalen and F/V Alaska Knight) to obtain the locations of red king crab catches during NMFS surveys. Contingent plans for the BSFRF pot surveying importantly included coordinating with 4 other specially-permitted industry crabbers that were on standby, each ready to also deploy 10 pots. The contingent planning was designed to allow for a total of 50 pots soaking to help find crabs for tagging in the event that catch rates were low. During June 13-15, a total of 10 commercial red king crab pots from the Royal American were baited, soaked for 48 hours and hauled to catch the targeted mature red king crab males. Catch rates were high enough that by the fourth pot pull, all of the target sample of 150 mature males had been captured, tagged and released. The remaining six pots were pulled and all crabs were released unharmed. The contingent vessels were notified that no further help from them was required. During the soaking period, the Royal American was able to switch back to continued trawl surveying.

One of the important aspects of BSFRF field work is to allow a spot for our major cooperative research partners to participate first-hand with our research. For our summer field work, this typically means that we hold a spot for both NOAA and ADFG to have their scientists come out with us on our surveys. The science party onboard the Royal American in June was again a combination of our cooperating research partners. Madison Shipley, BSFRF/NRC led the research as the field party chief. Dr. Leah Zacher, NOAA/Kodiak, Julia Dissen, ADFG/Kodiak, and Charles Heller, BSFRF/NRC made up the science party onboard, working well together for the successful completion of this work.